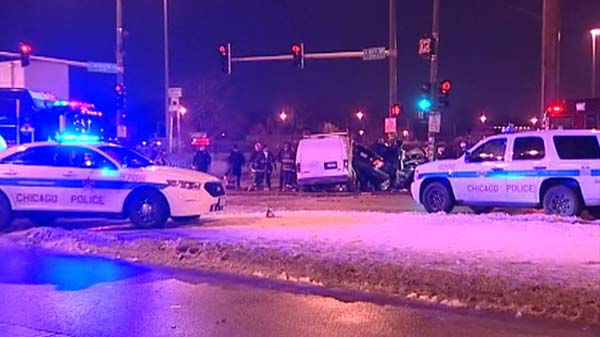 While working the midnight shift with my old friend Frank, a call of a robbery in progress was dispatched.  Being too far away to make an impact, Frank and I slowly headed toward the scene observing vehicles traveling the opposite way. We were trying to get a look at the possible offender leaving the scene.  A second call was soon broadcast: “Officers were now chasing the fleeing robbery offender.”  The chase took the main streets until the armed felon jumped the expressway attempting to elude the police procession.  Frank and I were the furthest from the chase, but we continued out of boredom.

Traveling North on the Edens Expressway and eventually finding ourselves on North bound I-90, we were starting to outrun our radio capabilities.  The last thing we heard was the dispatcher calling all non-essential cars off the chase.  Frank and I looked at each other and said “I didn’t hear that, did you?”

Proceeding along at about 90 miles per hour, the fastest this car would go, we found ourselves just over the Wisconsin border following hand signals from local Deputies and Sheriffs signaling the way. We pulled up on the outskirts of a corn field just as Chicago Officers were walking a handcuffed suspect back to their squad car.  The weapon was recovered as well as the robbery proceeds.  A wagon was called to transport the prisoner.  Great job by the Chicago Police. Almost.

During the chase through the toll gates, the Chicago cars had broken every one of the wooden toll arms but one.  A Chicago Sergeant was standing at the toll booths discussing the damages with a Tollway supervisor when the responding wagon approached.  Scooting by at about 50 miles per hour the wagon veered from the inner lane to the outer lane and took out the last toll gate left intact.  The Sergeant just shook his head and completed the report needed to pay for the damages.  You just can’t take the kid out of police work